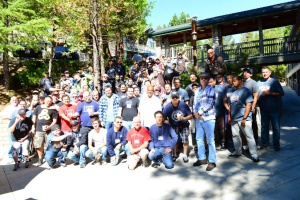 Calvary Chapel El Monte’s 2013 Annual Men’s Retreat was an absolute blessing. We had over 40 men go up to the mountains of Twin Peaks – for almost half of them, this was their first retreat – ever! We again teamed up with Calvary Chapel LAX who also took 40 brothers.

We had the privilege of welcoming Pastor Dan Finfrock of Intensive Care Ministries as our guest speaker. Pastor Dan who is a football coach, a long time pastor, and missionary taught us the importance of being, “Men of the Playbook.” He stressed the importance that, like an athlete who should know, breathe, and live their playbook, we should do the same with God’s Book, His Word.

As always the staff and the food at the retreat were top notch, but the highlight of the weekend was the fellowship. We believe that God did an amazing work in establishing brotherhood bonds between the guys. If for some reason you weren’t able to go with us this year, we pray you make plans to join us next year, if the Lord tarries.